Shading a Triangle in Software [C++]

I find it fun to reimplement GPU behaviors in software for learning purposes and wanted to share my intuition for how the shading of a triangle can be done with some simple linear algebra.

A triangle can be defined by three points or vertices. Each vertex has various attributes associated with it; for now, we’re just going to give each vertex a position on the screen.

So if we wanted to draw a triangle with a vertex in the bottom left corner, the bottom right corner, and the top middle corner, we would define it like this:

It's important to note that the vertices are defined in a clockwise order. First the top middle, then bottom right, then bottom left.

This will be key later on.

Each vertex has a position made of two floating point values. There are two because when working with the screen we only have two dimensions: width (x) and height (y).

So each triangle vertex has a position on screen, but we need to know which pixels on screen are inside of that triangle so that we can color them appropriately. We want pixels in the triangle to be non-black and the pixels outside of the triangle to be black. Some linear algebra will take care of that for us. 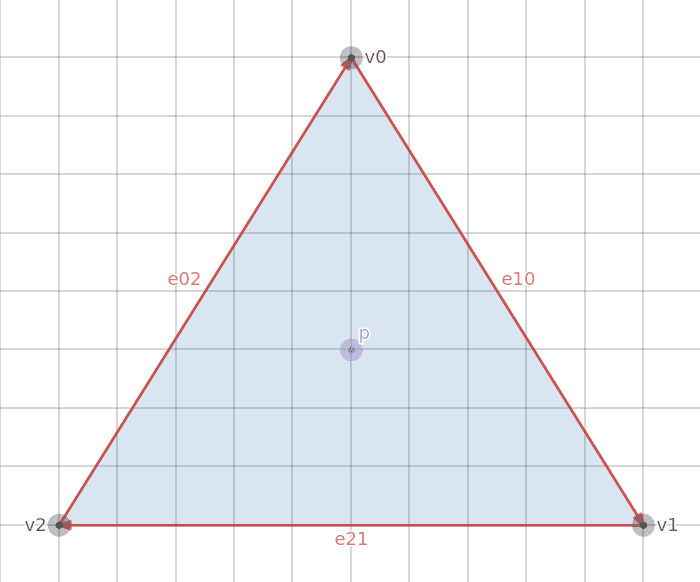 First we’ll create a vector from each vertex to the next adjacent vertex going clockwise by subtracting one vertex position from the other. Recall that Point A - Point B creates a vector pointing from Point B to Point A. 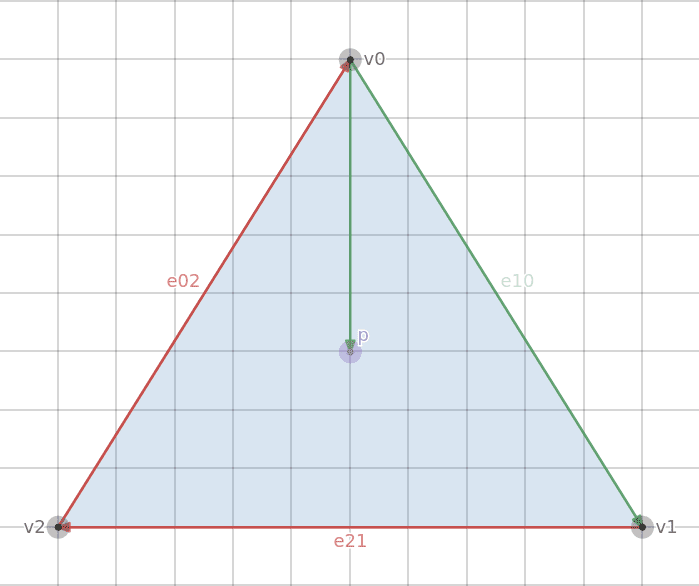 The new vector is the result of the subtraction p - v0 which creates a vector from v0 to p. If we take the 2D cross product of the two green vectors (p-v0 and e10), we get a value that is either negative, positive, or zero.

We do the same for the other two edge vectors. 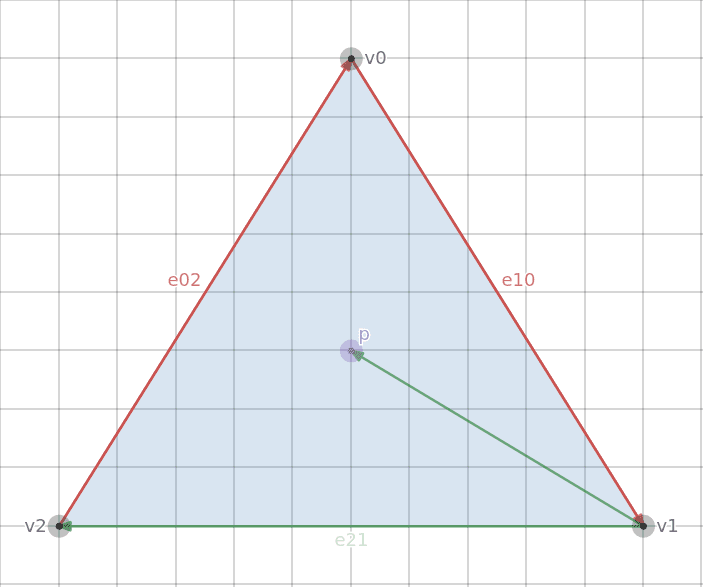 The green vector is the result of the subtraction p - v1 which creates a vector from v1 to p. 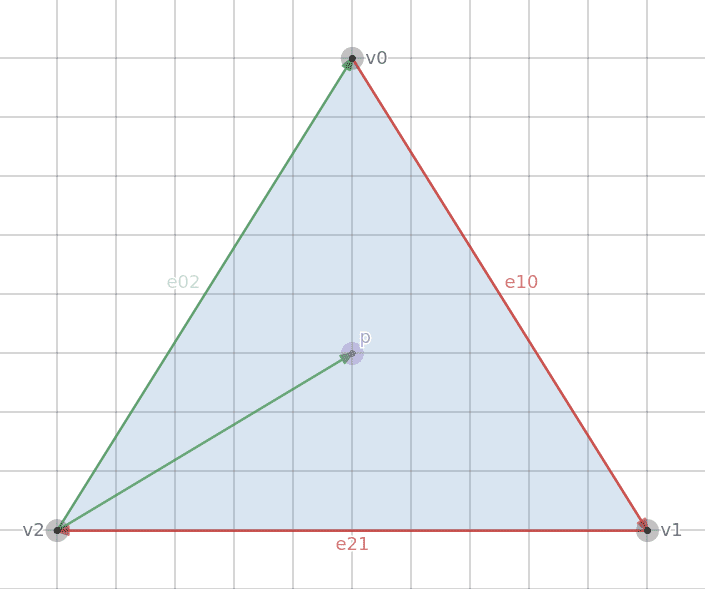 The green vector is the result of the subtraction p - v2 which creates a vector from v2 to p.

Then if we wanted to test Point P against e10:

What this all means is that if we want to know whether a point is inside of a triangle, we can take the cross products of each point vector with each edge vector. If all of them are greater than (or equal to) zero, then the point is inside the triangle and we can color that pixel.

We can define another structure representing a Vector and overload the subtract operator to create a Vector from the subtraction of two points. The Point and Vector structures have identical contents (two floats) but keeping them separated makes the code more explicit.

Then we create a function that will tell us, given two vertex positions (the edge points) and the point we want to test, the cross product of the vectors from those points.

To render the triangle, we iterate over all pixels on the screen and check if that pixel’s position is contained within the triangle. If it is, we color that pixel white. If it isn’t, we do nothing.

That produces this image: 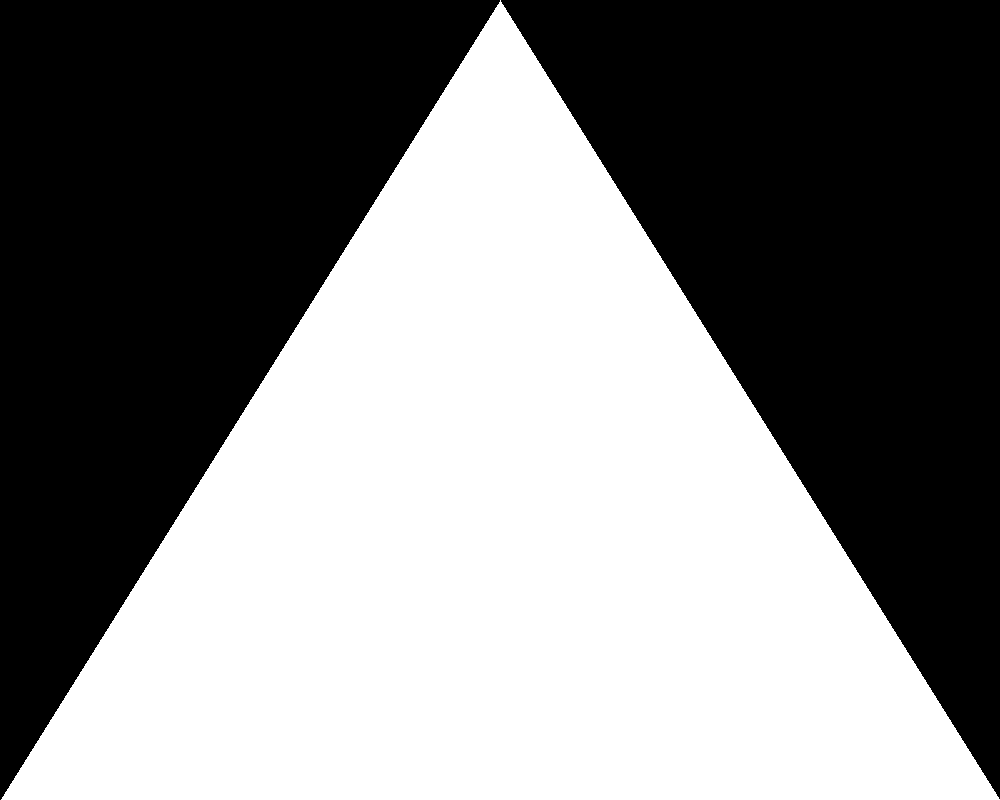 I'm writing to a generic 2D array of uint32_t called colorBuffer which can be the backing storage of something as simple as an image file that you write out, or it could be the color buffer of an SDL window.

That’s great. We can define a triangle with three points and fill it in with a solid color. Of course a solid color is not the end goal. It would be cool if we could associate other attributes with a vertex besides just position and then interpolate those attributes across the many pixels making up the triangle. 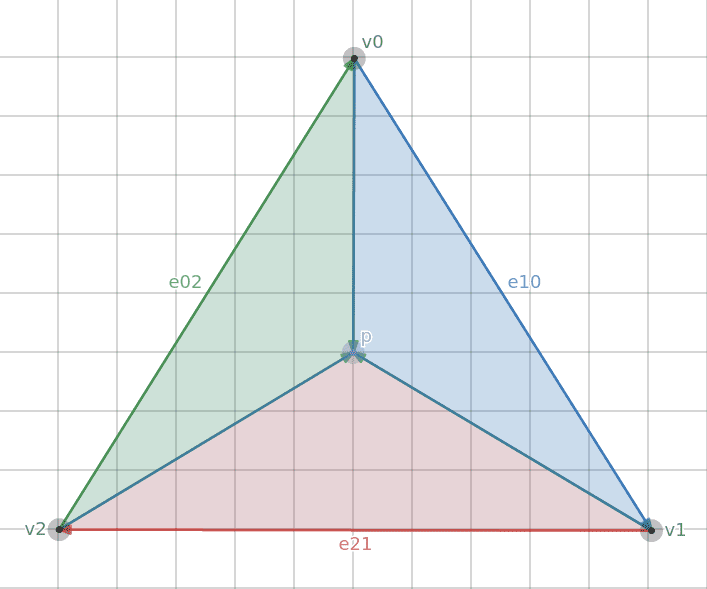 Each of the shaded areas represents a sub-triangle.

If we overlay each subtriangle with its respective area, we see something interesting.

As point P moves around the triangle, the areas of the subtriangles change depending on the point’s proximity to each of the three vertices. In other words, if we have some attributes associated with each vertex (like a color), then we can use the same cross product function we developed earlier to give us a value that tells us what proportion of each vertex attribute should contribute to the point as a whole.

If we divide each of the results returned from the edge function and divide them by the total area of the main triangle, we’ll get a normalized value (between 0.0 and 1.0) for each vertex. This value is the weight of that vertex on the test point. We can multiply each vertex’s weight with the vertex’s attribute and add the three weighted values together to get the final value.

We can demonstrate this by assigning a color to each vertex.

We’ll create a struct to define a color which is just four floats and add a color variable to the Vertex struct.

We can then redefine the triangle and assign red to v0, green to v1, and blue to v2.

To normalize the weights, we need to divide each by the total area of the triangle which can be found by sending each of the three vertices to the edge function. Then finding the color of a point is a matter of adding up the different weighted colors.

However, because we divide the results of the Edge function (e1, e2, e3) by another result of the Edge function (area), the 1/2 cancels out so we don't have to bother with it.
When a triangle is smaller than the size of the entire window/image, it would be inefficient to iterate over the entire size of the window/image. Instead it makes sense to create a bounding box for that triangle by calculating its min and max X and Y values, and then interating over that region instead. 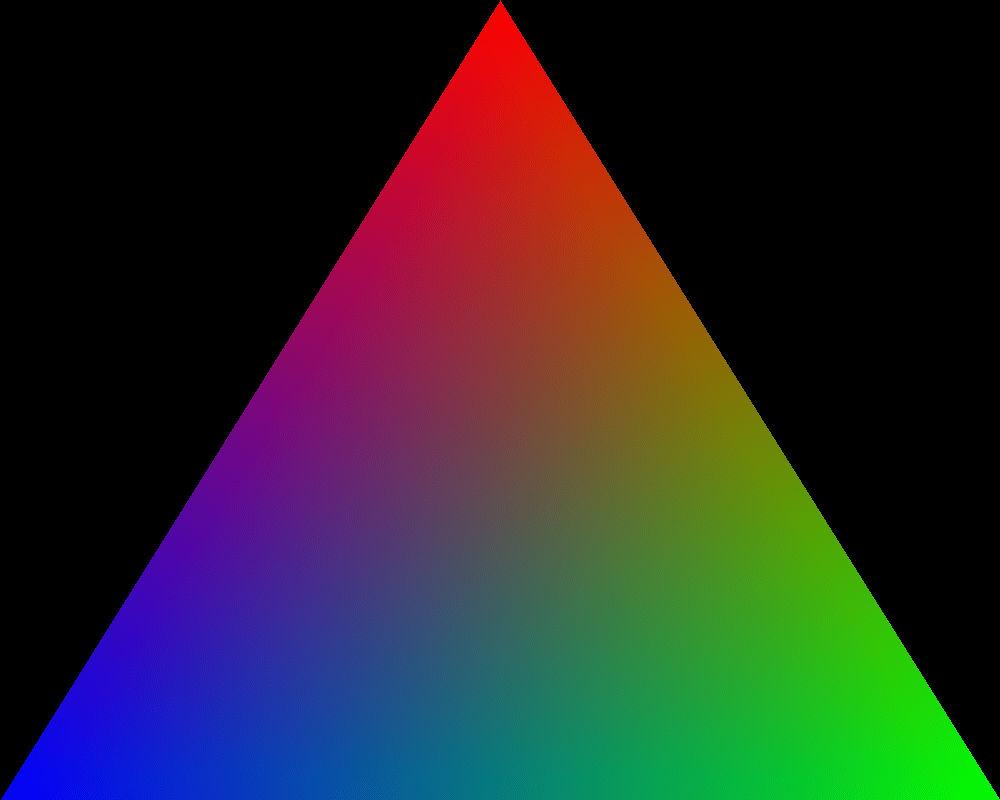 Anyone with experience with a graphics API like OpenGL should be able to see the similarities between what we’ve written here and how you would use OpenGL.

With OpenGL you send a buffer of vertex data to the GPU which contains attributes associated with each vertex (e.g., position, color, normal) and it then interpolates those attributes across the various pixels (fragments) that make up that triangle on screen.

What we’ve done here is similar.