My team and I are in the early stages of developing a 2D side-scroller set inside of a Chinese handscroll, and so we wanted to ensure the game’s art looked like ink set on top of a paper background. Unlike a paper camera filter where the paper would appear to be attached to the camera and in the same location relative to the camera regardless of the camera’s position, we wanted the paper to actually be in the background with parallax. In other words, as the camera moves in one direction, the paper moves in the other direction, creating the feeling of viewing a handscroll flat on a table and moving your eyes along its surface.

To achieve this, the paper background needs to be high res for the actual (physical) texture of the paper to come through visually. Rather than duplicating the texture repeatedly throughout the entire level, which would be tedious and could have performance implications, we developed a system to spawn the background on startup and then translate them according to the camera location. With this setup, from the camera’s perspective, there is an infinite sheet of high res paper in the background, but in reality the same sheets are just moving.

The goal was to build scripts that require little configuration and are very simple. So simple in fact that maybe they don’t even warrant a blog post.

There are four elements in the scene that work together to achieve the effect: 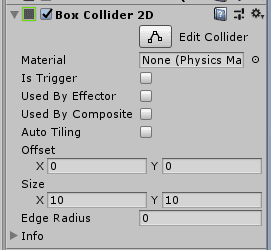 The camera has a Box Collider 2D attached so that the BackgroundTranslator script can be notified when the camera is leaving its trigger zone. We chose not to use the player’s collider in case of situations where the camera proceeds beyond the player for a cinematic. 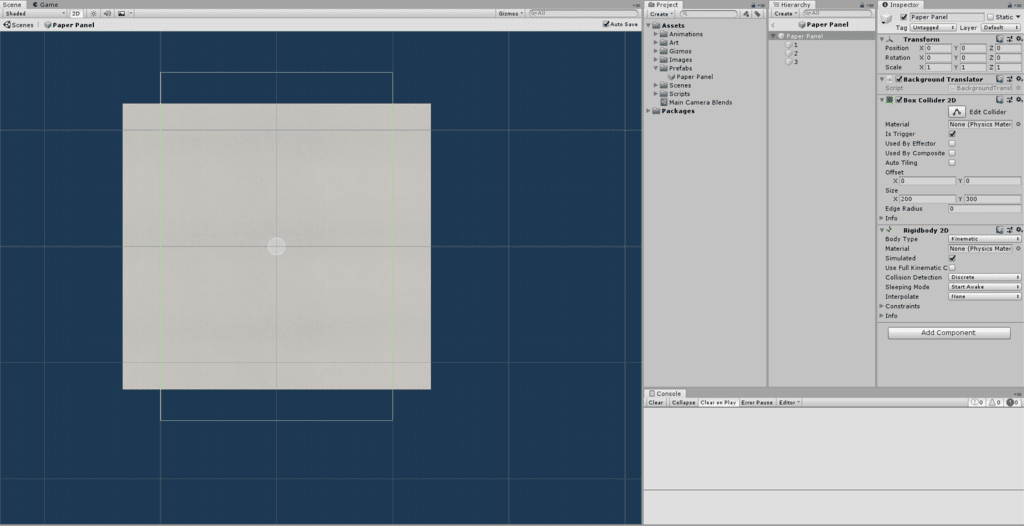 The Paper Panel prefab is a stack of the desired background texture, so that it is one texture width wide and three texture heights tall. Since our game is a side-scroller where the movement is primarily right-to-left, this prefab works fine because it’s tall enough so that the camera will never go above the top-most or below the bottom-most.

There is a Box Collider 2D in the middle with dimensions 200x300, which is sufficient to cover the majority of the prefab’s width and extend a bit beyond above and below as well. It’s a trigger because we don’t actually want it to collide with anything.

There is also a Rigid Body 2D which is required for the collision events, but it’s set to Kinematic so it isn’t affected by gravity.

Lastly there is the BackgroundTranslator script attached which contains the logic to actually translate the panel according to the camera location. We’ll look at that in a bit.

In this post I talk about paper textures, paper panels, etc, but everything can be applied to any sort of background that you would want to have dynamically move along with the paper (with minimal changes). 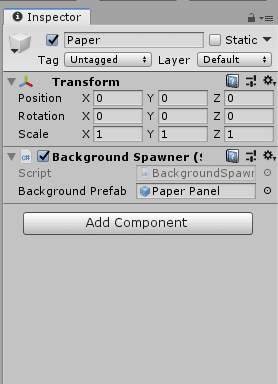 There is an empty GameObject that has a BackgroundSpawner script attached to it which is responsible for instantiating five of the paper panels on start and setting their initial positions. As mentioned in the introduction, we wanted as little configuration and setup as possible, so it’s nice having everything spawn and move into position automatically on start.

Each panel’s width is the same as the width of the texture itself, which is retrieved on start so that it can be passed on to the BackgroundTranslator script when it’s spawned.

Then each of the five panels are instantiated (Far Left, Left, Middle, Right, Far Right) in their proper positions relative to the camera’s location, their BackgroundPosition field is set, and the background width is passed on to each object so they can use it in the future when moving themselves.

The meat of it all. There are five panels and each can be in one of five positions: Far Left, Left, Middle, Right, Far Right.

The goal is to keep the camera looking at the middle panel so that there is always a buffer zone of two panels on either side to ensure that the camera always has some paper in its field of view (the camera might change size based on Cinemachine functions).

When an OnTriggerExit event occurs and the colliding object is MainCamera, then it checks to see if any translation is needed.

There are only four scenarios we care about:

We either translate once or twice the width of the paper texture, depending on the location.

After translating, we finally need to update our position (which should always be Middle) and the positions of all of the other panels, so that they’re accurate the next time.

All of this effort takes place only when the OnTriggerExit2D event fires, and only when the colliding body is MainCamera, so it doesn’t happen very frequently.

The script assumes that it's tracking the Main Camera, but could be easily changed to track a camera set via the inspector.
There is no error-checking for demonstration purposes.

Here is a video of everything in action. The camera moves to the left and the right at varying speeds and the background moves accordingly. There is also some early artwork tests to show how the ink-on-paper look feels, although it isn’t very noticeable when not fullscreen.